When I first decided to write a blog I made a list of all the different things I could write about.  One of the ideas was the incident that happened on June 26, 2017.  I didn’t know when I was going to write about it but figured I would blog about it when there wasn’t anything else pressing on my mind.  And then this Saturday happened……..

June 26, 2017-  After work my sister and I were picking up a patio table and chairs she had found on Offer Up and then we were going to drive it across town to our other sister’s house.  No matter how many times we tried to reconfigure the table and chairs so they would fit in the back of my car, we could not get it to fit. So we then had to drive all the way back to her house to get her car and then drive back to the table and chairs.  We had just reached her house when I got a call from my son.  His voice was serious (very much unlike him) and urgent telling me there was a fire in the kitchen, he called the fire department and was outside with our dog.  WHAT?????  Of course the seven mile drive to my house was the longest drive ever!

I finally reached the cross street to my house but was blocked by a firefighter directing a huge firetruck.  I rolled down my window and politely asked the firefighter if the house was okay. To my relief he said yes (phew) but when I turned down my street there were two firetrucks in front of my house, ten good looking firefighters on my front lawn and huge fans blowing into the house.  Apparently, the cause of the fire was grease. My son had been watching a cooking show and became inspired to cook some chicken.  He heated up some grease, stepped away from the kitchen to change his shirt (because he was going to be cooking with grease), the grease became too hot and immediately turned into flames.  Thank goodness he was okay (just a little shaken up) and the fire was pretty contained but it did have to be extinguished by the good looking firemen.  See below: 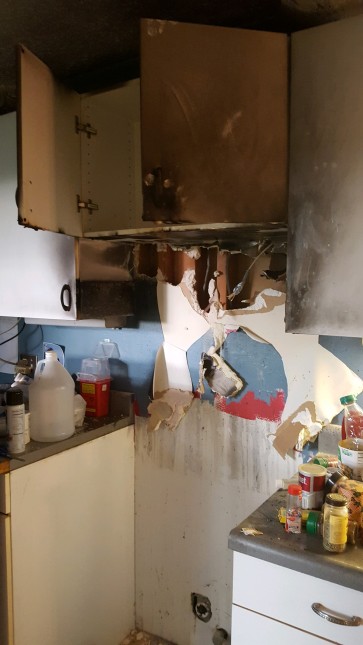 Ugly. But would you ever guess that this would end up to close to $40,000 worth of repairs?!!!  Crazy!  The next day the insurance adjuster came out and gave her estimate which included new cupboards, new counter, new floor and new stove (obviously). Then she explained the restoration people would be assessing  work that needed to be done as well and would most likely be adding to her list and boy did they ever.  I decided to go with the restoration company Nationwide (my insurance company) endorses.  The following day the guy came out, he checked out the kitchen of course and then went through all the rooms.  He looked in my closet and saw soot (what??) and then took a paper towel and ran it across the top of the mirror above my dresser. Soot. He found soot everywhere!

Bottom line: except for one bedroom and both bathrooms my whole house would need to be repainted and EVERYTHING in my house would be taken out and cleaned individually and to expect to live in a hotel for a couple of weeks.  I thought this was a little ridiculous and shared with him that this seemed a little excessive since it was a small fire just at my stove.  He explained that this is why I have been paying insurance for the last 21 years, soot gets into the walls and he would not want us to be smelling smoke three months later.  Good gracious.  All of this made me very nervous but what could I do?

We literally did not have a working kitchen all summer long except for the three weeks we stayed in a hotel.  When I was researching extended stay hotels there was one that was nice and a little bit more expensive so I called the insurance adjuster and asked her about the budget for our hotel stay, her response? “You do what works for you and your family.”  So nice.  I guess Nationwide really is on my side.  So to shorten up this long story that still is not finished, everything was finally completed at the beginning of October!  Thank goodness for my sister who helped me pick out the cupboards, flooring, back splash and counter tops.  I definitely did an upgrade for very little money out of my pocket and I LOVE my kitchen!!!  See below: 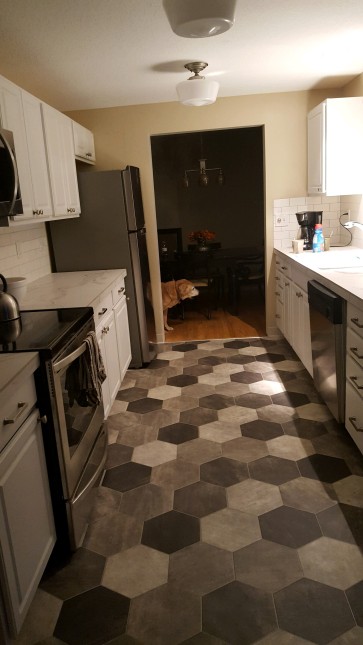 Unfortunately I do need to change the paint color of the walls.  I was on vacation when I had to pick the wall color and it turned out to be a lot more yellow then I expected (ugh).

I am now hyper vigilante about fire and fires, so I thought it would be a good idea to get my chimney cleaned and checked since it had been a few years since I had it done.  At the end of November the chimney person cleaned out the fireplace and also found cracks in the fireplace box and chamber.  She explained that if you do not fill the cracks the heat from the fire will go into the cracks and start a fire in the walls.  Ugh.  She also quoted us $2000 to fix it.  My hot bf though researched it on Youtube and found a much cheaper way to do it yourself.  She also explained that those of us living in the Pacific Northwest should always have a chimney cap on top of our chimney.  When it rains the water goes into the chimney so then when you have a fire it creates steam and this steam is what causes the cracks in the fireplace.  Suffice to say I haven’t had a fire in my fireplace yet this year.

My very first childhood friend Colleen had a ornament exchange holiday party this Saturday.  After all these years we have remained friends, we don’t talk or see each other as often as we should but we still consider each other dearest friends.  I will say that Colleen’s house is absolutely beautiful!  It belongs in Sunset Magazine or some high end interior design magazine, its filled with white leather couches and ottomans, mirrored walls, french doors out to wonderful patios, simply elegant yet comfortable and homey.

I shared my fire/kitchen story with Colleen and she was surprised.  My sister was at the party as well and I filled her in about the fireplace.  The party was a lot of fun, good food and drink.  The next morning my sister called me and said Colleen had a fire at her house after the party!  OMG!  I spoke with Colleen and she explained that she put out the fire in her fireplace after the party with a little bit of water to make sure all the embers were out, then about 2am in the morning her whole mantel and walls were in flames.  She believes the fire started from inside the walls most likely due to cracks in her fireplace.  Ugh. My heart goes out to her.  The firefighters put out the fire, she now has a hole in her ceiling and her roof.  She has a long road ahead………

Don’t try this at home.  Don’t heat up grease too high and too fast.  Have your fireplace checked.

I am a mother to two wonderful sons, I work full time in Corrections and have the best boyfriend ever of seven years. I love beauty, fashion, home decor, humor and a good discussion on matters that pertain to all of us. I wanted to start something new so I hope you join me in sharing the things that you enjoy!! View all posts by alishamorton